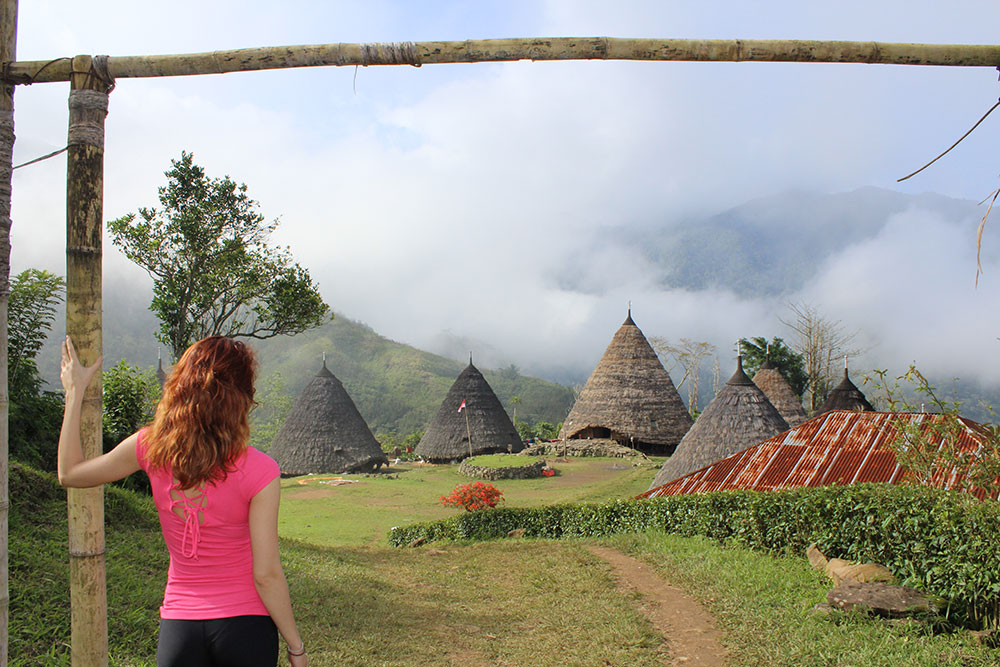 We all come from a long ancestral line of people that carries history, genes and rules of conduct. And we all have a birth right to belong to it; a right that comes with obligations. So, what is the price for disobeying, for harming the balance and stepping outside the high walls? When we experience guilt, could it be because we broke an important rule of our tribe?

I remember just standing there and staring at the mountain in front of me, thinking how I was ever going to make it up there when I didn’t even like hiking. I had been preparing for weeks for this trip in order to get to what I was picturing as ‘the forbidden land’. I was offered a stick and shown the path up the hill. I took a moment to ask myself if I really wanted to do this. Going to such a remote place makes you ask all sorts of questions about whether you will be welcomed or not or if a meaningful connection with the people you find there is actually possible. After all, I was trying to enter a world that had built such high walls around it to keep the outsiders outside.

After hours of climbing up steep muddy slopes, I understood that nature had no intention of making it easy. That was one difficult journey and I couldn’t shake the feeling that it was meant to be that way. When we reached the final slope, the guide stopped and announced our arrival. “We are waiting for permission”, he said. He told us the latest story of two men who came to the village unannounced and photographed it without permission. The chief asked them to leave and demanded that they erase the pictures. They refused and left, only to fall into a pit, almost to their deaths. The camera was damaged and the pictures were deleted. ‘The end’. I remembered reading about it, that whoever trespassed would suffer the consequences, but I still didn’t know what to make of that story. I decided that safety was more important so I cautioned myself not to disturb anything that existed at the base of that hill. After all, their house, their rules!

A short while after, we heard a high-pitched voice allowing us to descend. The village was definitely worth it - seven circular houses completely surrounded by mountains; as I said, high walls. It was one of the most beautiful settings I had ever seen. And the feel of it all, the clear blue sky and the unexpected clouds which came out of nowhere and erased all of it from existence in less than two minutes. It truly felt magical, like there was something more to it than met the eye. I’d read about their shamanic practices before the trip, but the actual experience of being there was deeply moving. Being exposed to a life so different from your own will change you. I started to wonder how this exposure will affect the connection to my homeland. I had noticed before how, whenever I got back home after a long trip, I had this feeling of not being able to fit in anymore, like connection didn’t come naturally but it was rather something that I needed to put a bit of effort into. I guess these are the consequences for choosing to fit in somewhere else, even temporarily.

We entered the land and continued towards the chief’s house where he was ceremonially seated and waiting. After years of working in politics I could tell this was serious. Although the chief had simple clothes and was sitting bare foot on the floor, I couldn’t tell the difference between him and any other chief of state. I shivered. We made our offering and were given permission to stay. I think the exact phrasing the chief used was, “You are welcome to stay with us and enjoy the hospitality of our village. And don’t worry, our ancestors will not bother you for the remainder of your stay.” I smiled thinking of the ‘overprotective’ clouds which camouflaged the village.

Getting to know that peaceful tribe was a deeply moving experience. It almost felt like we were in a timeless place, fenced from any influence or waves of change – an ‘untouched’ world. This gave me a sense of total safety, like nothing could ever go wrong here, like everything was perfectly aligned to the Natural Order of life. I visited the land, watched the men sewing baskets and the women picking coffee while carrying babies on their backs. I even listened to the chief’s stories about the tribe’s history and the dragon who lived in the altar outside the hut. According to the shaman chief, the dragon was always keeping an eye out to make sure the rules were being followed, guarding the survival of the tribe. Even the houses were built with the entrances facing the altar, so that the dragon could make sure no one harmed this balance. Life came at a price. This made me wonder what price I was paying for my own life and how many systems I was unconsciously bowing to – my family, my country… were there any others?

When using the systemic lens we say that abiding by the rules of the system is felt as a state of innocence, while disobeying them brings a feeling of guilt. Innocence and guilt may be easy to define in that remote shamanic village, but they are not so obvious in the western world. Here the tribes are bigger and we are somewhat less aware they exist. Nevertheless, we all come from a long ancestral line of people that carries history and genes and rules of conduct. That is a fact. And we all have a birth right to belong to it; a right that comes with rules and obligations. So what is the price for disobeying, for harming the balance and stepping outside the high walls?

When we experience guilt, could it be because we broke an important rule of our tribe? And if so, do the consequences involve falling into a pit or being cast out? Many times when people come to see me for a consultation, they tell me things like, “I am stuck in a dark place, I can’t move forward.” I wonder if what they are really talking about, without even knowing, is that pit from my guide’s story. I wonder if they are living through the consequences of disobeying the invisible binding contract between them and their tribe. And if unconscious disobeying carries such heavy consequences for the soul, how can we consciously choose to live within the given boundaries while nourishing our own unique expression of life?